From Life to Tour

Hi everyone,
After a year of owning a lowly Life Pro (not performance) I've traded up to a top of the range Tour - from the minimum of equipment to the max! After a day - and 150 miles I thought I'd share some first impressions.

1. Performance/handling etc.. So the Tour has more power - but weighs more. Despite the extra mass it felt to me exactly like the Life - perhaps once slowing down to a traffic light it felt a bit laden - but swinging it around bends/roundabouts is near enough the same for me. Its got 19" wheels and tyres - that I thought might make the ride a little harsher, but nope, feels exactly the same to me. Possibly a little less road noise, but that might be down to the tyres (continentals instead of bridgestones).

2. Range. Well its the main reason I got one... Hilariously the delivery mileage range on the GOM with 100% charge was 429miles! After todays driving - average 3.5m/kwh its giving 220 with 62% of the battery left. All good - we'll see how it goes from here and in winter I'm expecting it to me more useful (58kwh winter range meant I had to split/charge some journeys I didnt want to..). Hoping to see the faster charging for longer periods from the larger battery too - the new charge curve for the 77kwh battery is impressive (>50kw right up to 85%). We'll see.

3. Gadgets. Good? Bad? Useful? Bit too soon to tell for some but BIG likes are for (a) Travel assist - brilliant with the capacative wheel.. (b) the HUD - I thought this would be shit/useless, BUT especially with the ACC and TA it points out which car its following etc.. and lines in the road tell you when its engaged the TA properly. Big arrows from the sat nav when to turn etc.. are like the ID light - a bit Meh..

MEDIUM likes are (a) the seats (comfy) but not sure I really need electric adjustment (I liked knowing I had the seat two notches from the back etc..) but have more support under the bottom of thighs which is great for me (tall). Massage function - weird. (b) reversing/forward cameras and 'area view'. This IS pretty cool - camera in wing mirrors, above number plate and at the rear give you one of those 360 looking down on the car view things. Cool - but useful - not entirely sure - suppose I get a good view to avoid squashing the cat when reversing! The forward camera wasnt expected and thats probably useful for high kerbs/things just out of view.

4. Interior. Fairly sure its MY22 - and I've talked about the seats. But it has the lighter panel on the dash and doorcards that 22.5 has - though are they standard on 22 tours? The door material looks darker to me and feels a little better than on my life. Wife thought it was a bit different too. Not having been in an older Tour I wouldnt know if this was standard or not.

5. Other stuff. Alloys nice - going to be paranoid about scratching them now! Manganese grey (metallic black really) - great colour. Variable boot floor (waste of boot space - though nice ot have it flat from time to time etc..). Our lad will like the drinks tray / armrest next to his childs seat in the rear. Keyless entry is actually quite nice (and closing) - illuminated door handles nice touch.

The ££ numbers. Basically I paid a bit under £10k to trade up. My Life had increased in value by about £7.5k.. I got my life at the sweet spot of all the deals and discounts - so effectively I've rolled these on to the Tour and got it for £34k. And had a free years worth of driving. I wanted the longer range tour when I first got one - but the ££ were too much - now I've managed to make the fake maths stack up

I think you’ll like the matrix lights!
Making £7.5k on the Life is outstanding. My 18 month old 1st Edition with 16k miles is, according to Motorway, +£5.2k. Hard to cash it in though!
I am test driving the Megane EV in July and am on the priority list, but I’m not over keen on a pokey cabin after the ID3 tbh
ID3 1st Edition in glacier white. Wallbox charger. Octopus Go when the smart meter works (not often).
Top

I'll admit to a little jealousy but optimism. By the time I made the decision to order the ID.3 (March 2022) I could only pick the Life, and VW then withdrew Manganese Grey. Hopefully the models and options will open up again and if I get on with the ID.3 I can get the HUD and Matrix lights etc!
Top

It doesn’t look like the demand/supply imbalance isn’t going to change for a good while.. Even M3’s have a 9 month plus wait now…
Top

A great first impression summary. Good to hear that the ride and handling were similar to the lighter model. I didn't realise that the cameras gave such good coverage. Hope it gets dark enough for you to check out the lights!
Tour 77kWh Pro S in Glacier White arriving shortly
Top

12 months, if you want an RWD. My Dad's been waiting for his RWD for 6 months already, and there's no guarantee whatsoever he'll be matched to a car in Q3. And this is for a bog standard RWD/White/Black/Aeros taxi-spec model.
Tesla Model Y Long Range, collecting 25-Jun-22
CANCELLED : ID.3 Tour (long story

12 months, if you want an RWD. My Dad's been waiting for his RWD for 6 months already, and there's no guarantee whatsoever he'll be matched to a car in Q3. And this is for a bog standard RWD/White/Black/Aeros taxi-spec model.

I think the problem is, the “bog standard” is probably the most popular so taking longer. The performance models seem to be being prioritised, either because it makes them more money or less demand vs supply I’m not sure.
ID3 Max Pro Performance - Scale Silver
Order: 3140****
Original ETA - Late April/Early May
Delivery scheduled - 18 May 2022
Top

Isn't Tesla's model - make a load with different specs (usually more with the simple specs/options) then stick them on a ship and assign to customers whilst en route?
ish...

MotMot wrote: ↑
Tue Jun 14, 2022 10:28 am
Isn't Tesla's model - make a load with different specs (usually more with the simple specs/options) then stick them on a ship and assign to customers whilst en route?
ish...

There are virtually no options on any Tesla, and yes they manufacture in bulk and match produced vehicles against waiting customers.

Your first impressions pretty much mirror mine, I did my first long journey in my new Tour yesterday and loved everything you've highlighted above - particularly the Travel Assist/HUD combo which just works gloriously well projecting the lane and vehicle tracking info directly into your field of view.

I had a 4am start so I had the chance to briefly try the headlights, amazing, I can guarantee you'll love them!

Regarding the range, mine was also optimistically informing me that the 96 percent charge I'd done was going to provide me with just over 400 miles of range, the reality was 281 miles, and arriving home with the battery down to 2 percent (another 10 miles remaining) by the time I'd negotiated a totally unexpected 40 mile re-route courtesy of a road closure. Very happy with 280 miles of driving almost entirely at motorway speeds though, and this is the exact reason I opted for the Tour over the Max.

BTW, the massage seats become a lot less weird, and actually quite pleasant, towards the end of a long driving stint - just make sure your battery still has enough power left for you to feel the benefit of them!!
Top

So plugged my Tour into OBD today to have a sniff around (wondered if you could find out when it was built! But I couldn’t…).

Anyway - I had a pleasant surprise - it seems I’ve got 1.7kwh more capacity than it should have on paper 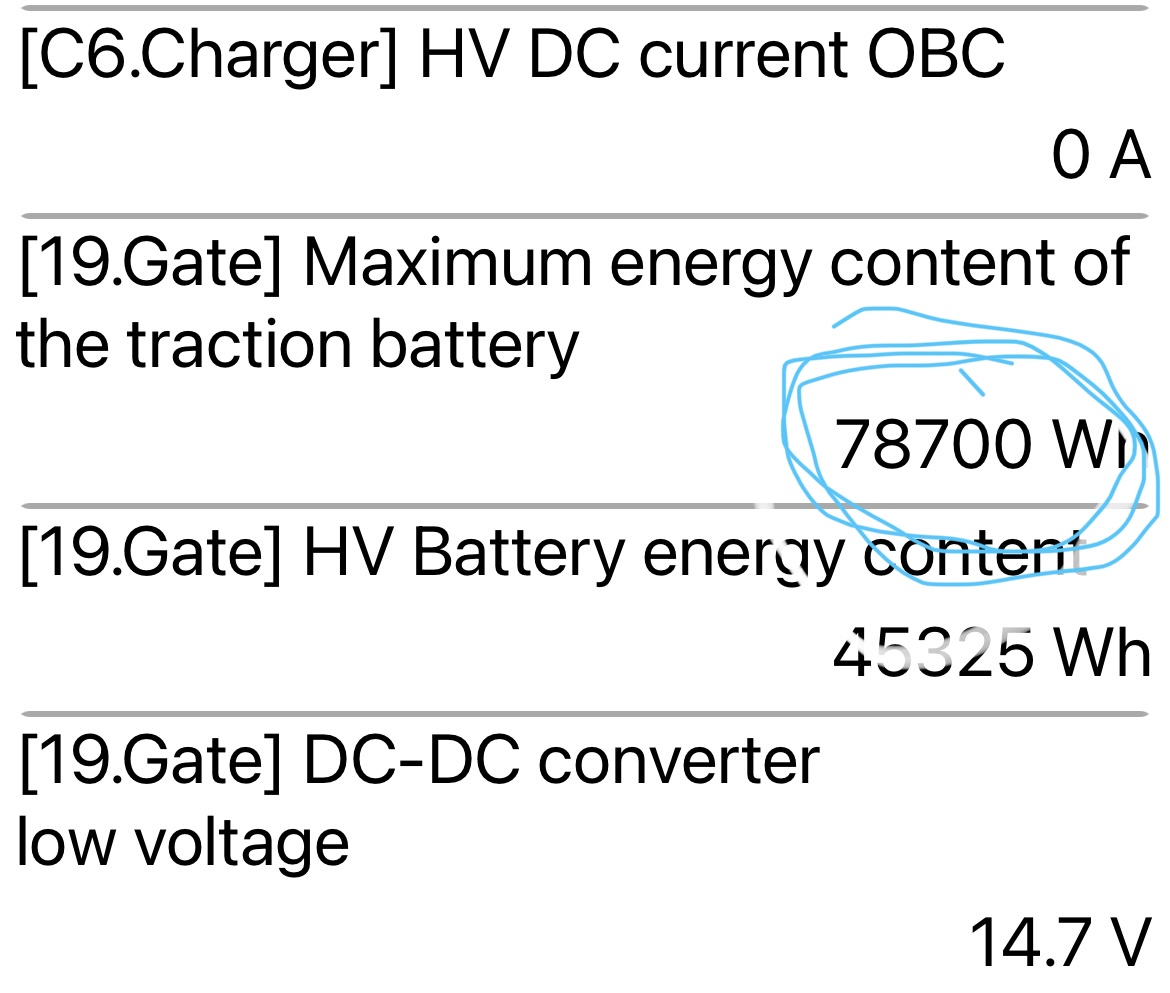 Our Volkswagen ID.3 Forums are free to join and open to all.